IMQ Group is the Holding of the Companies being part of IMQ Group, that represent the most important Italian company in the field of conformity assessment (certification, testing, audit, inspection). The synergy of the companies forming part of it, the authority acquired during more than 60 years of experience and the completeness of the provided services, make IMQ Group both the benchmark and the companies’ partner aiming to security, quality and sustainability. Target areas are really different and range from electrical engineering to electronics, from telecommunications to automotive, from gas to industrial plant building, from construction materials to agri-food, up to renewable energy. For each category, and depending on the circumstances, IMQ Group’s companies are able to provide horizontal type or targeted services: product certification, environmental certification, certification according to the EU directives, management systems and professional figures certification, plants and buildings audit, laboratory test, testing in order to achieve international type-approvals and support for export, surveillance of production abroad, technical and regulatory support and training.

The Making of IMQ Group

IMQ Group comes out of a development and transformation in continuity that has its origin within the “Istituto Italiano del Marchio di Qualità”. Founded in 1951 – as an independent and non-profit association – at the initiative of the major scientific and technical national bodies of the electricity sector, the “Istituto Italiano del Marchio di Qualità” has experienced an expansion process that has led it to progressively extend its field of activity and to gain control of other companies. Following the market evolution and the diversification of services to be provided, in 1999 the “Istituto Italiano del Marchio di Qualità” decided to create IMQ S.p.A. and to entrust it with all its operations starting from the year 2000, with a focus on disclosing and promoting a safety and quality culture.

The acquisition of CSI in 1995, of the majority share of IMQ Primacontrol in 1998, of a shareholding of the Istituto Giordano in 2001, then followed by the creation of the company IMQ Clima in 2003 and then the acquisition of ICILA and ELCOLAB in 2004 and in 2009 respectively, the acquisition of Prototipo by CSI in 2014, have enabled IMQ to further widen its scope, extending its presence all over the country. On an international level, IMQ opened a representative office in Shanghai, China, in 2003, that has now become IMQ Certification Shanghai Co. LTD; the Spanish company IMQ Ibérica and IMQ Krakow R.O. in Poland - becoming later the company IMQ Polska - were set up in 2004 and in 2007, respectively. IMQ Gulf, a company based in Dubai, was founded in 2015.

The merger by acquisition of both IMQ Primacontrol and IMQ Clima that IMQ S.p.A made in 2015 and in 2016 respectively, as well as founding IMQ Group S.r.l - the holding company of the Group - in late 2015, have led IMQ Group to be currently set up as follows: IMQ Group S.r.l. (Holding), IMQ S.p.A., CSI S.p.A., IMQ Ibérica S.L., IMQ Polska SP. z.o.o., IMQ Certification Shanghai Co. Ltd, IMQ Gulf FSCo. 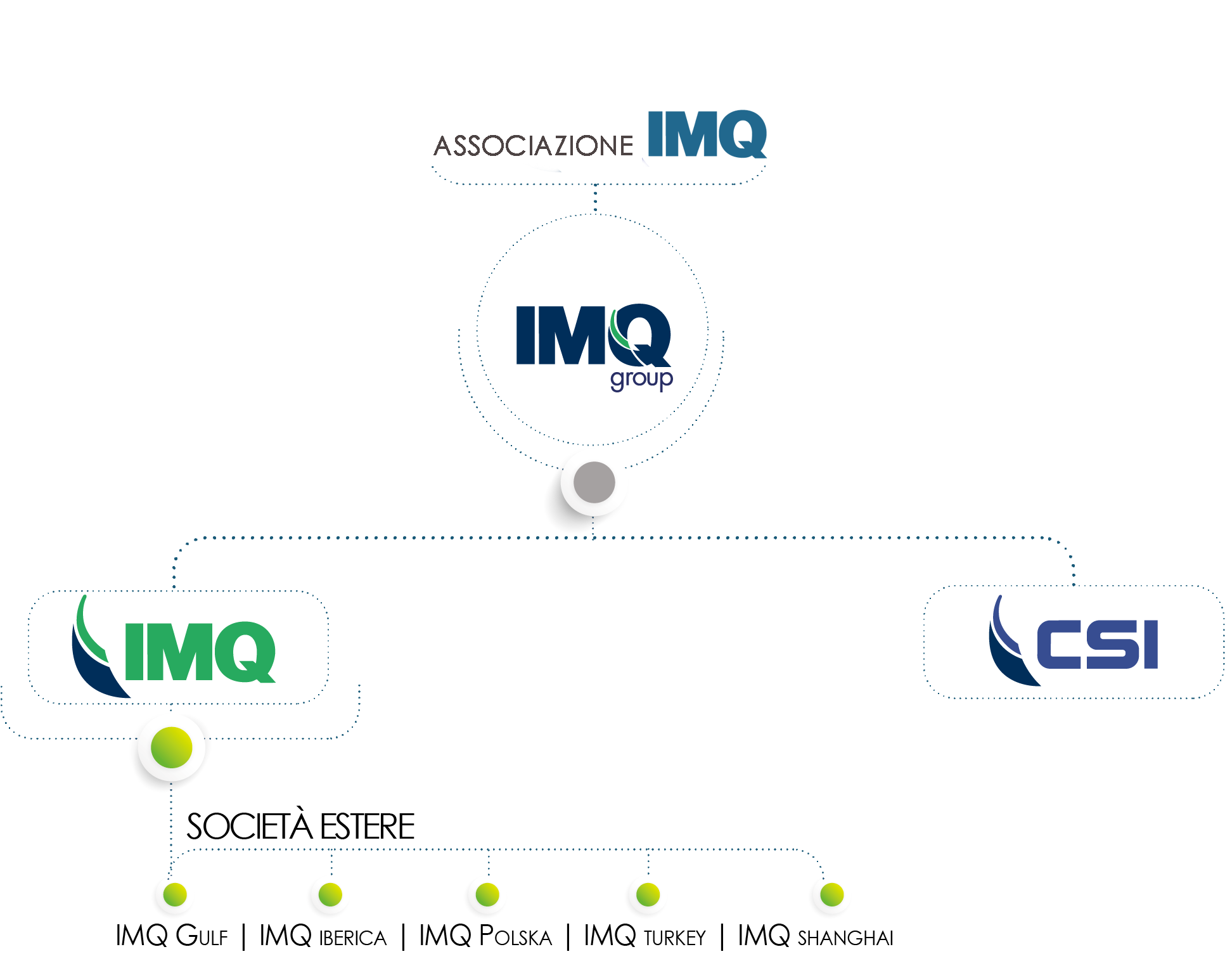